Let the music surround you! It creates awesome vibes and supports any mood you wish to dive into.

Game music is as significant as the playlists you have on your streaming platform. Soundtracks create an atmosphere for brave adventures — and there are no questions about this. But what about such games as CS:GO? Doesn’t that music become a bit annoying after hundreds and thousands of play hours?

Yeah, we have this cool thing to solve this small issue — CS:GO Music Kits. Activate it, and some default tracks in Counter-Strike: Global Offensive change to custom ones. It’s a great feature even if the original music doesn’t annoy you. Just try it out and feel the difference. As a marketplace of in-game items, DMarket has lots of CS:GO Music Kits. In fact, our platform has so many of them that we decided to make the process of choosing soundtracks for your shooting matches a bit easier. Here is our list of the 10 best Music Kits — and guys, we share our personal opinion, don’t get mad not seeing “that greatest song of all time”.

What do you think about ENCE? It’s totally a provocative question, as this Music Kit is strongly associated with that Finnish team. The ENCE guys used it as their anthem at the finals of IEM Katowice. And The Verkkars, the music creators, are also from Finland.

It’s a track from the Canadian rapper bbno$. The official description hints at some toxic atmosphere around this composition. Who would mind winning a match by destroying the opponents, bringing them to boiling point, and then asking “Are you mad? Why are you mad?”

What about some intensity in your CS:GO fighting spirit? This track has it, so if you like the atmosphere of powerful battles with trustworthy teammates on your side, get this Music Kit into your inventory. The artist is Scarlxrd, a popular British rapper. His music style is pretty unique, and it might be exactly what you are looking for.

It’s another composition by Scarlxrd in our top list, and it’s as unique as CHAIN$AW.LXADXUT. You might think it starts a bit more relaxing — but that is an illusion. Probably it’s the same sort of illusion as your gentle appearance in CS:GO maps — to just burst with powerful action and let your team win the round and the whole game.

From rap to the classic vibes of hard rock. This Music Kit is based on the studio album Aggressive by the American band Beartooth. A cool thing about it is that you will not be distracted by voice and words. The Kit is full of atmospheric music that helps you tune in to intense and hopefully successful shooting battles.

Are you ready to bring brighter rhythms into your CS:GO drive? The Verkkars & n0thing have created a pretty interesting mix of styles. When you think you already feel the spirit of their track, they manage to surprise you with something unusual. Perhaps your own playing style should be like this — unpredictable to win many rounds and cheerful to enjoy every moment in the game.

This CS:GO Music Kit creates both inspiring and intense atmospheres. They kind of replace each other while the sounds flow into your ears. And it pretty much represents how players and teams should feel in matches! Be inspired to learn and improve your skills, create dangerous plans, then carry out intense and fast actions, flawless communication, with a full focus on victory.

Here is something cheerful for you guys. Light beats with streams of light sounds. The Estonian DJ Mord Fustang shares some music Diamonds with you — let them bring you many successful matches. The genre of this Music Kit is rather experimental, and it totally can represent your mood on a joyful day.

Many players prefer avoiding tension around their CS:GO matches. A calm heart and cold mind could bring much better results. Keep your rage at bay with this somewhat relaxing Music Kit. Do you like to be focused on the shooting and actions of your team? Despite this, the soundtrack by the American rock band AWOLNATION is not sleepy. It creates relaxed joy and positive confidence in your strengths.

Buy Music Kit | AWOLNATION, I Am

Did you ever play Hotline Miami? It’s a difficult, unforgiving game — exactly like CS:GO. In that adventure, you need to kill a bunch of opponents in a location without taking a shot. Actions should be quick and perfect. Sometimes only many attempts help players clear a level.

This soundtrack is exactly from that game. And if it creates a proper atmosphere for those missions, it might really support your focus in CS:GO. In this (our favorite) game, success comes to those who are ready to practice a lot and thus polish every action in different situations.

The collection of Music Kits in CS:GO is impressively huge. We encourage you guys to be brave in your experiments and find the best soundtracks especially for you. Remember — you are not limited to one. Your mood changes and the music should complement it.

Do you know what else could change alongside your mood? Yes, game weapons! Surprise your teammates and opponents with colorful equipment, buy CS:GO skins on DMarket.

Check out other CS:GO item lists:

For other interesting info on CS:GO and in-game items trading, stay tuned to DMarket on Facebook and Twitter. 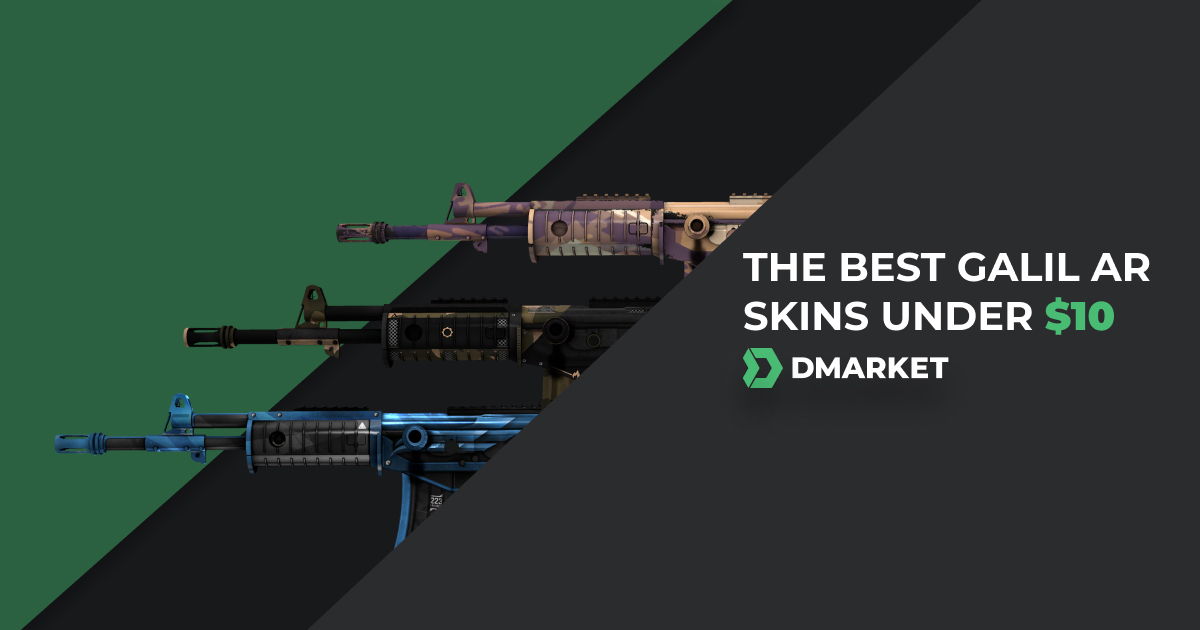 The Best Galil AR Skins under $10