It is common knowledge that one of the reasons CS:GO has such a large community around it is the skins. They allow players to express themselves and customize their weapons and characters, and there is a plethora of them available.

These skins are commonly used by all players, both casual and professionals, and it would be interesting to take a look at the skin loadout of some of the most prominent CS:GO players in the world. Today we will be doing just that so stick around if you want to find out which skins your favorite CS:GO icon is using. Gabriel Toledo, more commonly known as FalleN within the CS:GO community, is a Brazilian professional CS:GO player and a former professional player of other Counter-Strike titles such as Counter-Strike: Source. Gabriel has been an active player on the competitive scene since 2014 and remains so today, playing for Imperial and holding the position of an AWPer and an in-game leader. Some of his highlights include the amazing feat of killing an enemy who was trying to defuse a bomb with a headshot from an AWP in a match against Furia Rivalry. Kenny Schrub, also known as kennyS within the CS:GO community, is a former professional Counter-Strike: Source player and a currently inactive professional CS:GO player. KennyS has been active on the professional scene since 2011 and has played for G2 Esports as an AWPer. With over a decade’s success with his CS:GO career, kennyS has had many memorable moments such as his triple kill with an AWP in 2020 against Mousesports. Martin Lund, more commonly known as Stavn within the CS:GO community, is a Danish professional CS:GO player and the brother of Jacob Lund who also plays CS:GO professionally. Stavn has been active on the scene since 2016 and is a player for Heroic where he holds the role of a Rifler as well as the AWPer. You can see Stavn in action during the PGL Major tournament where he famously planted a bomb and performed a double kill against Virtus.pro, winning the match.

CS:GO has been rising in popularity since it was released, especially on the professional scene. Nowadays there are many good players out there who strive to be the best, but which players are currently standing at the top? You can find the answer to that question as well as thet skins they are using by checking out the best CS:GO Pro players and their skins. Helvijs Saukants, also known as broky within CS:GO and gaming circles, is a Latvian professional CS:GO player who is currently playing for FaZe Clan. Broky is one of the youngest professional players on the CS:GO scene and has been active since 2019 and usually fills the role of the AWPer. Mareks Gaļinskis, better known as YEKINDAR within gaming circles, is a Latvian professional CS:GO player who has been on the scene since 2017. YEKINDAR currently plays for Virtus.pro and holds the position of a Rifler. Among his notable highlights is the triple kill that he performed with a USP in a match versus Cloud9. Boltz, real name Ricardo Prass, is a professional CS:GO player from Brazil who currently plays for Imperial, together with Fallen. He has been active on the competitive scene since 2014 and usually plays as either a Rifler Support or a Rifler Entry Fragger. His skin selection includes the AWP | Dragon Lore, the Desert Eagle | Blaze, and the StatTrak™ AK-47 | Fire Serpent, which he used to get a double kill in a match against EnVyUs.

Becoming better at CS:GO takes a lot of time and practice, however, having the correct peripherals and their settings custom-tailored to the player can go a long way in making that road much easier. There are many brands and different types of peripherals to choose from — but lucky for you, we have narrowed the selection. If you are looking for a perfect set, consider checking out our list with the best keyboards and best mice for CS:GO. Florian Rische, more commonly known as syrsoN within the CS:GO community, is a German professional CS:GO player as well as a former professional CS Source player. SyrsoN has been present on the professional scene since 2012 and is currently playing for BIG as an AWPer. His skin loadout includes, but is not limited to, the AWP | Wildfire, the M4A4 | Howl and the AK-47 | Fire Serpent which he used to obtain a triple kill in 2020 during a match against Ninjas in Pyjamas.

The console commands in CS:GO allow players to further customize their gameplay experience by changing various aspects of the game. While there are many different commands available, one of the most popular ones is the give weapon commands, which are useful when players want to practice with a specific weapon or view certain skins in-game. Owen Butterfield is a British professional CS:GO player more commonly known as smooya within video game circles. Owen has been active on the competitive scene since 2016 and currently plays for team Fnatic in which he holds the role of AWPer. The skins he prefers using tend to vary, but among them are the Stiletto Knife | Doppler, the AK-47 | Neon Revolution, and the popular AWP | Asiimov which he used in a match against GMP_YNG and got a triple kill. Patrick Hansen is a Danish professional CS:GO player known by his in-game alias, es3tag. He has been active on the competitive CS:GO scene since 2014 and over the years has played for various teams including Tricked Esport, Heroic, and Astralis. At the time of writing, he holds the role of the Rifler Support within Ninjas in Pyjamas. His skin loadout includes the StatTrak™ M4A4 | Hellfire, the StatTrak™ AK-47 | Frontside Misty, and the StatTrak™ Desert Eagle | Cobalt Disruption which we were able to see in action in the 2021 match against MIBR when he got four kills with it. Håvard Nygaard, also known as rain, is a Norwegian CS:GO player who has been playing professionally since 2013. He is the longest-lasting member of the FaZe Clan, being present at the time when the clan first originated as Team Kinguin. He usually fulfills the role of a Rifler and can often be seen using skins such as the AWP | Redline, the M4A1-S | Mecha Industries, and the Glock-18 | Fade.

This concludes our list of some of the most popular CS:GO professionals and highlights some of the skins that they are and have been using throughout numerous exciting CS:GO matches. These have, without a doubt, left a mark on CS:GO history. 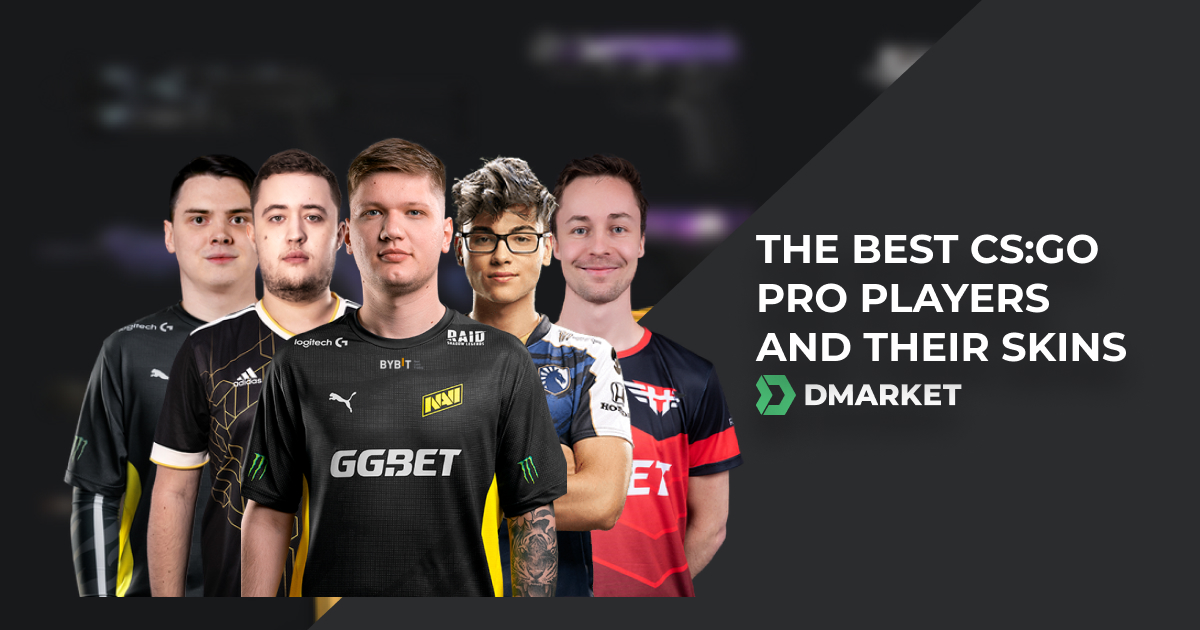