NFT as a New Art Form

Today, blockchain has covered literally all business niches. It also affected such phenomena as art. Let’s find out what an NFT is, and analyze the rationality of investing in this type of token.

NFT or non-fungible token is a token which represents a digital object. But, unlike other tokens, each of these cryptographic tokens is unique (specific) and cannot be exchanged or replaced by another similar token, despite the fact that tokens are usually fungible. Also it can’t be used as a currency. This type of token was created in 2017 and was based on Ethereum smart contracts.

Fully digital art (only in the form of a digital file without any other physical medium) was one of the first use cases for NFT. These tokens provide authentic proof of a digital object and the provenance of its ownership. Without non-fungible tokens, it is extremely difficult to verify the legality of distribution for such objects over the Internet. In real-world use cases, in February 2021, American artist Beeple’s “Everydays: The First 5000 Days” became one of the most famous and expensive examples of digital art that was sold for $69.3 million as an NFT at a Christie’s auction. A few days earlier, the Nyan Cat GIF was sold at an online auction for $590,000. Also, Grimes, Canadian musician, singer, songwriter, record producer, and Elon Musk’s girlfriend, sold her drawings in the NFT format for $5.8 million.

The physically existing work by Banksy, “Morons” was burned in New York, after being converted into an NFT token. The company sold the digital copy of “Morons” at Sotheby’s for $380,000.

In the gaming industry, the starting point for NFT technology was the CryptoKitties game, based on collecting virtual cats. The user takes two NFT cats and produces from them NFT offspring that are created with different levels of rarity, that could then be sold or saved.

After the CryptoKitties hype, other game development companies rushed to master this niche, with the launch of new games such as Axie Infinity (the Ethereum-based game with a weekly income of around $1.8 million) and F1 Delta Time (with more than $1 million in income per week). Some eSports solutions vendors also plan to integrate NFTs into their consumer offerings. For example, in League of Legends, some matches from this game can be sold to the consumers. There are also perspectives to provide digital player cards. 100 Thieves and Simplicity eSports plans to implement something similar to this.

In general, the scope of these tokens is much wider, ranging from music to games - including everything that is made by a person and can be considered unique. Buying NFTs is interesting to investors, gamers (who collect rare skins, weapons, etc.), as well as art lovers. If you are a fan of PC games and eSports, visit DMarket, a platform where you can earn NFTs for free from watching streams on TWITCH. This solution was created in collaboration with NAVI - one of the largest eSports teams in the world with its own metaverse. In addition to watching streams on TWITCH, you can also craft unique items that can be sold on dmarket.com. Some eSports solutions vendors also plan to integrate NFTs into their consumer offerings. For example, in League of Legends, some matches from this game can be sold to the consumers. There are also perspectives to provide digital player cards. 100 Thieves and Simplicity eSports plans to implement something similar to this.

How to Build an NFT?

An NFT is initially based on a digital file in JPEG, GIF, or MP4 format. With the help of this file, a unique blockchain record with an encrypted source is formed, as well as a smart contract that contains the policies for transferring the file from one owner to another.

Optionally, a media description can also be placed in the blockchain. However, the implementation of such a complex recording is very expensive.

After the sale, the NFT image is stored in the cryptocurrency wallet of its current owner and in the virtual environment (for instance, in CryptoVoxels).

The difference from standard cryptocurrencies for the end user is that NFTs are not comparable in value to each other. That is, the NFT from Grimes is not equal to the NFT from Banksy. The value of each of these tokens depends on the value of the particular art object (or any other object of intellectual property).

With the help of NFTs, developers solve the securing ownership problem of digital objects. NFT tokens are unique in nature and exist only in a single copy. Thus, they cannot be copied - each NFT contains identifying information that is used to prove ownership, and cannot be replaced without the consent of the owner.

To create a new NFT, you should use one of the existing standards, for example, Ethereum ERC-721 or ERC-1155. ERC-721 is the legacy Solidity smart contract standard for non-fungible digital assets, imported from the OpenZeppelin library. As for the ERC-1155, it is based on the idea of ​​semi-replaceability and extends the ERC-721 capabilities.

Later, other versions of the standards have appeared, such as ERC-998 (an evolving standard that allows to create a token from several intellectual property objects at once). Another standard, ERC-875, allows for sending multiple collectibles in a single transaction.

As for the next NFT standard - the Blockchain Bean Asset or BBA - it provides token holders with the ability to decentralized content storage. It is still under development.

Generally speaking, NFTs are no longer limited to Ethereum today. NFT can be built on the basis of NEO, EOS, Tron, Flow, Cosmos, and other blockchains.

NFTs: Are They a Bubble or Not? Despite the skepticism of the global digital community and several periods of a sharp drop in cryptocurrency value, it still stays afloat and is supported by many payment systems (even Visa, Paypal and Mastercard implement Bitcoin support for their customers).

However, the problem with the bubble theory is that the current owner of the token does not receive full rights to the bought intellectual property.

For example, the video of Nyan Cat - an animated flying cat which cost its current owner $580,000, can still be found for free and by completely legal access on YouTube. Does this mean that the NFT does not have any legislative support under it?

On the one hand, it does. On the other hand, from the point of view of true collectors, NFT purchases are an opportunity to own an original creation (for example, the original Da Vinci’s Mona Lisa, and not a poster bought for 5 bucks at a kiosk).

The fact that this type of token is interesting to art connoisseurs is confirmed by the fact that from February 4 to March 5, 2021, the trading NFT volume on the largest platforms amounted to a record $480 million. Note, that not only entrepreneurs showed their interest in the digital intellectual property sector, but also many cryptocurrency investors.

Can You Make Money on NFTs?

So far, there are no rules for making money on NFTs, since these assets have low liquidity, and the value of each item is subjective.

On the other hand, if you are an influencer or a media character, you can artificially grow the price of your art object and sell it for a lot of money.

The value of intellectual property items has always been biased. Therefore, the transfer of ownership to the digital plane did not become something radical in terms of a revaluation of these goods.

On the other hand, the purchase of an NFT is a very promising niche - both for connoisseurs of art, gaming and eSports, and for investors. Therefore, you can start investing in NFTs today to find a new, modern source of income. 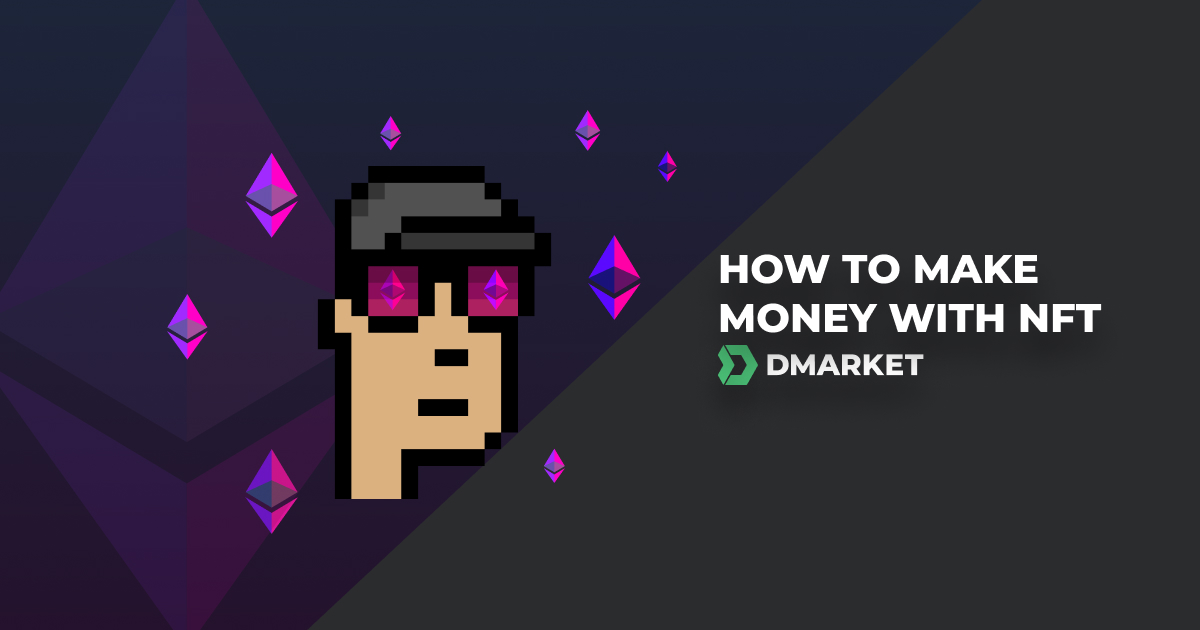 How to Make Money with NFT | Top 10 Strategies

How to Trade NFTs on DMarket 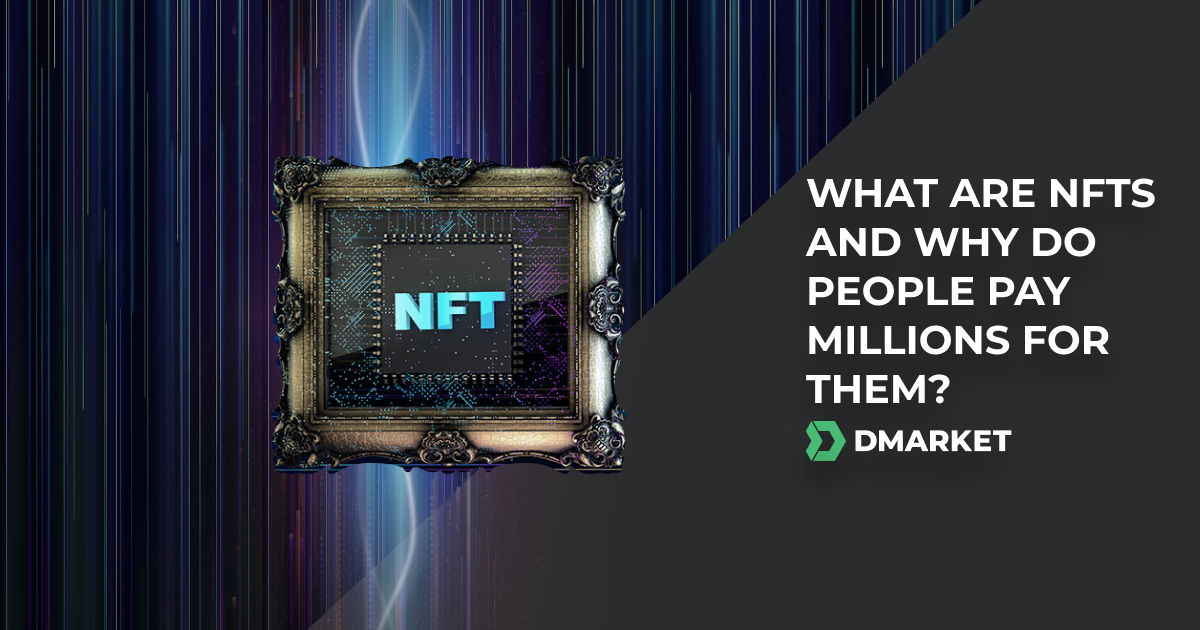