When Did NFT Start? | The Beginning of NFT Era

Non-Fungible Tokens have become a strong part of modern culture and the economy. Sure, you might meet people who would rather argue about the significance of digital art pieces and their role in the vast economic process. But you know, it is hard to deny that NFTs have made an impact and they are here to stay. NFT history is happening right now, in front of our amazed eyes.

But before we fly away into the horizons of the future, let’s take a look at the past. How did the era of NFT start? Knowing the sources, we can better understand this specific area of the digital economy — and thus make some very profitable investments.

Uniqueness in a Distributed Ledger

NFTs bring a specific feature of the real world into the digital one and even improve it.

Things around us are unique. Even serial goods are not identical, but the feature of uniqueness reveals itself in the most concentrated form with art pieces. There can be only one such painting, and every copy — yep, it’s just a copy.

Non-Fungible Tokens allow us to have unique objects in the digital world. This is kind of a different paradigm to sharing images on the internet. The original NFT is unchangeable and clearly distinguishable. Any copies do not have the same value.

In a way, NFTs are even more protected than art masterpieces of the real world. They contain info on the owner (current and previous). And it contains info on all the price changes. Thanks to decentralized technology, falsifications are rather impossible with Non-Fungible Tokens.

When Did NFT Start? The whole thing about uniqueness wasn’t part of Distributed Ledgers in the beginning. Blockchain found its biggest usage in Bitcoin, but those are just numbers, there is no art connected to it.

The idea of adding uniqueness to blockchain was first voiced by the authors of the Colored Coins project. It was practically the same Bitcoin (small denomination) but with some meta data attached. The idea was described by Meni Rosenfeld in the piece Overview of Colored Coins, but successful practical implementation wasn’t possible due to some technology limitations.

If we’re counting from when the idea became public, then NFT started in 2012 with Colored Coins.

What Was the First NFT? You know how it happens. Someone has a bright idea, and then the community takes it, improves it, and makes it real. Having unique assets in a distributed ledger? That sounds great!

In May 2014, Kevin McCoy created the first ever NFT, Quantium. The digital artist used the Namecoin blockchain for this asset.

While exploring the idea of unique digital assets and the possibilities of implementing them, Robert Dermody, Adam Krellenstein, and Evan Wagner created Counterparty in 2014. It’s a peer-to-peer platform and an open source internet protocol based on the Bitcoin blockchain. Counterparty was a technical tool for making various NFT projects possible.

It was a moment when the worlds of gaming and NFT met each other. Spells of Genesis is a game that allows players to add their in-game items to a blockchain. To create this game, the team of authors used Counterparty and launched one of the first ICO (called crowdfunding in those days).

On the surface, it’s just another card game on Counterparty, but Force of Will differs by the scale of its success. After its release, it became the fourth-highest selling game in North America. It meant the idea of NFT started entering the general gaming community — such popularity did not go unnoticed. And this link grew into a much bigger presence of NFTs in gaming and esports.

The addition of this frog to a blockchain is as significant as the success of Force of Will. With Rare Pepes, NFTs enter the world of popular memes. It’s a chance to involve even more people in digital uniqueness. Rare Pepes started a Meme Economy. Pepe the Frog is a central figure of a well-known meme. This character was created by Matt Furie. The NFT versions have different authors — and every incarnation of Pepe is unique, visually and by its data.

NFTs on the Ethereum Blockchain

Early practice of using NFT clearly proved that the Bitcoin blockchain technology doesn’t really meet the needs of these unique digital assets. At some point, NFTs successfully migrated to the Ethereum blockchain. This step solved scalability issues and started a new stage in the history of NFT. In fact, this NFT project copied the idea of Rare Pepes. We have here the same Pepe the Frog in lots of variations. The only difference is the new technological core. Perhaps, this successful transition opened many new opportunities for the NFT economy. The year 2017 saw the start of many remarkable projects. The Larva Labs studio created this collection of CryptoPunks: images of randomly generated characters. There are 10,000 CryptoPunks in total.

Some of those characters have become pretty rare. For example, Punks with Alien or Ape styles are represented in limited variants, so their value is high.

CryptoPunks is often considered the start of the art movement in NFT. The very process of creating algorithmically-generated images drew significant attention. As there are no more characters beyond the original ones their artistic and economic significance only increases. This NFT art project on Etherium includes 30 digital cards created by seven different artists. Curio Cards are interesting as they are taking a step toward human-made images (instead of CryptoPunks’ randomness).

In addition to that, Curio Cards proved again how important uniqueness is for NFTs. One of the cards was misprinted, so the collection got the image 17b. A small feature added something interesting to the background and made the whole collection somewhat more fascinating. Curio Cards gave an additional boost to NFT as an art form. And again, NFTs demonstartated their usability for the gaming industry. CryptoKitties was a huge project everyone talked about. It’s basically an addictive game. Players invest their money in a cryptocurrency and then create unique digital assets: images of cats. The playing process is similar to other games with virtual animals. This time, you have cute kitties. Every creature has a mix of attributes, which affect their appearance and the rarity level. You can collect cats and breed them to get new species.

After that, you can keep your kitties or sell them. Gameplay-wise, CryptoKitties might not be too exciting — the cat images are static, so they literally “do nothing.” But the possibility of becoming an author of your unique cute NFT attracted quite a few people to the project.

With the technological basis settled (even if it continues to evolve) and with the cultural and economical value proved, NFTs got their huge success somewhere around 2021. The success consisted of additional projects appearing on the market and easier opportunities for people to invest in an NFT of their choice. For instance, we could highlight: It’s a collage that includes 5,000 images. The artist is Beeple, an illustrator from Wisconsin. He was creating one image per day and then just combined them in one digital file. The price of Everydays: the First 5000 Days reached a record of $69.3 Million.

It’s a collection of procedurally generated ape icons. Owners of such an NFT get access to a closed online club, and some celebrities decided to join it. Success of the Yacht Club was followed by a variation, Mutant Ape Yacht Club.

NFT history might be compared to the general history of cryptocurrency. It would be not surprising to see some ups and some downs — in price and general attention. Let’s not forget that we are only at the dawn of the NFT era! But eventually, it’s easy to expect positive progress in this industry.

DMarket is part of the NFT phenomenon. Our platform increases the presence of such assets in the listings, and we’re working hard to grow further in this direction. Stay tuned to DMarket updates on Facebook and Twitter. 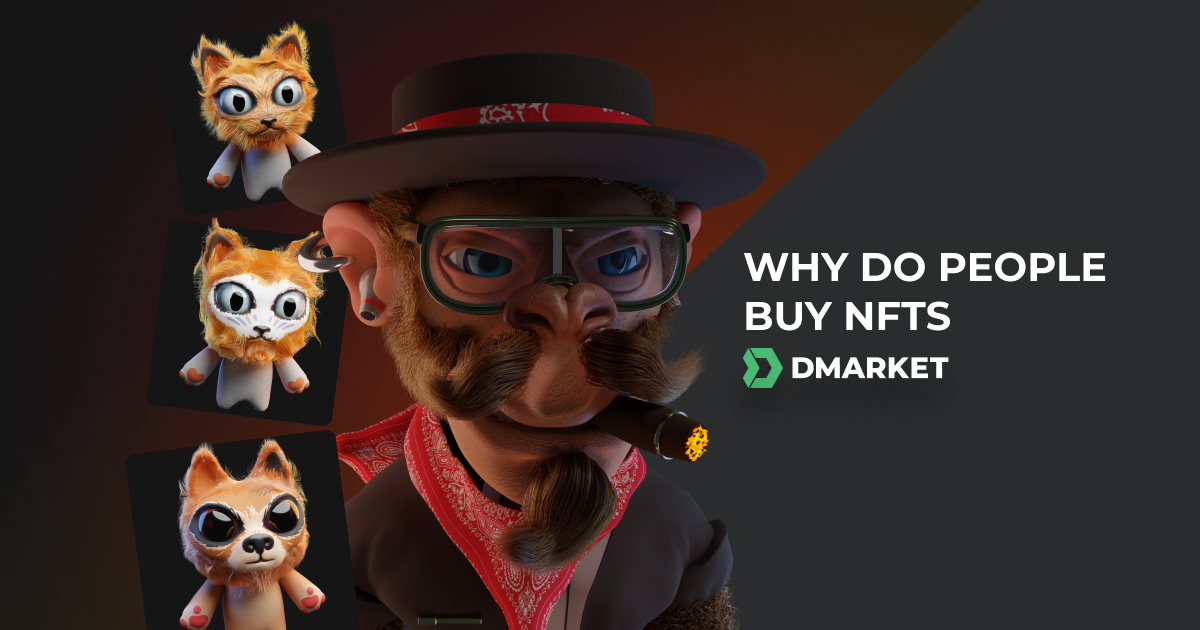 Why Do People Buy NFTs?