Being a newcomer to a game is such an exciting period. Yep, you hardly get any victories and often make hilarious mistakes, but still, noobs experience special pure joy from every new adventure. And in this game, you have a very good chance to grow and quickly develop exceptional skills - beginners are like an empty canvas that can paint the layers of their own success. To do this in the best way possible, it would be wise for noobs to absorb helpful pieces of advice - such as tips on how to play Team Fortress 2 from this article.

Jumping into multiplayer matchmaking is a mistake sure to spoil your whole experience in any huge game. Especially, in one such as Team Fortress 2 that has a community of dedicated fans - yep, they definitely can destroy your enthusiasm. You need to know the basics of control, feel the game atmosphere in a relatively safe environment, and just understand where to run and who to shoot. Training in TF2 is an essential course for newcomers, and you need the best basic TF2 beginner guide. It may seem like practicing weapons of a few classes (Target Training) and completing a super easy Control Points match (Dustbowl Training) is a super slow start (“let me shoot them all already”), but still, treat yourself to this gaming simplicity. It will pay off!

Consider returning to the training when you start playing new characters (Demoman, Spy, and Engineer) - to remember their weapons. Only the Soldier has in-match training.

2. Play Matches with the Bots

This tip is a continuation of the previous one. Target Training gives a basic experience with weapons. Dustbowl Training offers only a subtle taste of real matches. Jumping from these to multiplayer is like trying to participate in a CS:GO Major after playing one match only.

Offline Practice with bots is located in the same Training menu but it’s much more exciting. Take your time to enjoy Team Fortress 2 with no other people involved. And be ready to lose a lot, see your character killed, and make stupid mistakes - the good news is that bots don’t judge or become mad at you. Multiplayer matches are a test not only for your skills but also for your emotional stability.

3. Get the Basic Experience in the King of the Hill Mode There are three basic modes in Offline Practice:

After finishing the Dustbowl Training, players naturally want to start the Control Points mode on the same Dustbowl map. Don’t do that! Many points to capture create additional tenseness and require good knowledge of the game. Even if this mode is first in the list, skip it and move straight to King of the Hill.

This mode is more straightforward. You will learn the location faster and will be able to enjoy the match almost immediately - without the starting frustration. King of the Hill in Team Fortress 2 is the most welcoming place for noobs.

Like in Dota 2, it is important to start TF2 with an easy character. Thank goodness, the choice here is not so complicated - 9 classes instead of 100+ different heroes. And the best decision is to play Soldier.

That guy is versatile. He runs to the front line to shoot opponents, but he is also good in defense. His Rocket Launcher is pretty good even without proper aiming, so just shoot somewhere near the feet. He has a Shotgun and a Shovel and they are super effective in close-range battles. In fact, Soldier has everything you need to delve into Team Fortress 2. And you can play him effectively even without a real understanding of the class roles and the match flow. Info from this beginners guide to TF2 should be enough - just enjoy and try and learn in the process.

5. Don’t Be Afraid to Retreat

Unlike CS:GO, Team Fortress allows players to return to the match after their characters are torn to bloody shreds. But that’s not a reason to play kamikaze and run into hopeless areas. You should learn to survive in this game. Retreat when your health is low. Call for the Medic or find the medicine supply - the time lost to this is better than time wasted in respawn and returning to the battle.

Learn to retreat and then join your team for more powerful attacks. Your guy is not the main hero of the fight, but his death will definitely make the whole team weaker.

6. Medic and Heavy Are Your Next Choice

When you start winning with Soldier, it’s tempting to play this class again and again. Jump out of this convenient pattern and expand your skills to other classes. It’s a significant step to enjoy many possible shades of fun in this game, becoming a much better player, and eventually finding your best role. Even if you chose the Soldier at the end, the experience with other classes will help you to understand how to get better at TF2 team much better.

After playing Soldier, choose Medic or Heavy. The first one is a support. He is an observer that sees the fight from a specific angle. This role is important for the team and helps you to see what other classes are doing. Heavy is a great destroying power. Controlling him is almost as simple as playing Soldier, but he should choose other positions and act differently - essentially, be more defensive.

Medic and Heavy will give you a good basis to move forward and play other classes. You can follow this plan.

It’s the same important step as learning the classes. The game has many maps. Playing on new ones is often uncomfortable but without this, you will not be able to progress in TF2.

Be brave to explore new paths, check out hidden rooms, and try out unusual shooting angles. All Team Fortress maps are multilayered, and those who know them well, have significant advantages in battle.

Just take the role of a beginner again and start playing on a new map. Break your behavior patterns on seemingly well-known locations to try and think outside the box. Don’t rush the process - explore everything.

8. Move to Control Points and then to Payload

After King of the Hill, choose Control Points. This mode is more difficult - a bigger number of points to capture demands better knowledge of the map, understanding of classes, and flexibility in team strategies.

Then, play Payload. This mode is very different. You should protect a cart or attack it. So it’s like starting another game. Still, the previous experience will help you to feel the mode and just enjoy it, being an effective player at the same time.

But, when to go to the multiplayer? Anytime you are ready! Somewhere at this point, you will feel the limitations of offline battles and will be ready to join the TF2 community. Do it! The game opens itself in matches with and against real players. It’s a challenging step, but it’s absolutely worth taking. Multiplayer games are a social phenomenon, and Team Fortress 2 is no exception. You interact with other people in different dimensions, and one of the most brilliant here is through cosmetic items.

Lots of skins have been released by Valve over the years. Some of them are gorgeous. Some are hilarious. There are TF2 items that have even slight practical usage. And all of them are a reflection of your mood and personality. You express yourself through those funny hats and colorful guns, so start exploring this aspect. Many experts think that items give Team Fortress the power to succeed and exist even after 13+ years.

There are quite a few ways to obtain items, such as crafting, random drop, and of course, trading. The last one is probably the most effective when you want to get something specific, something that perfectly suits your style. And DMarket is the best place to buy TF2 items - you can get them cheaper from other players.

Of course, the opposite option is also exciting. Trade TF2 skins on DMarket for cash. The more you play, the more items drop into your inventory. Most of them will gather dust on those virtual shelves, so sell them and use the money for whatever you want. For example, for those excellent TF2 game weapons you dream about!

Hey, isn’t this obvious? The game is named Team Fortress for a reason. But it’s so easy to forget that and start playing as a superhero. Avoid this mistake! Your power lies in teamwork - from choosing a nice diversity of classes to well-coordinated actions of all the guys together.

It’s much better to play with the same people. You know each other and better understand what to do. It’s the best TF2 experience! Even if you only have a few core players, the matches will be much more interesting.

Of course, time and effort is needed to build a team. So even while playing with random people, try to feel them as both your friends and potentially long-term partners.

Think about your team as one organism and coordinate your forces to achieve much better results.

11. The Game Is a Mess, so Enjoy and Be Patient Team Fortress 2 is a very unique game. It’s often absolutely chaotic and unpredictable. Don’t try to bring too much logic into it! It should be a mess, and it will be so. Accept this atmosphere and enjoy it. It’s a fun experience first of all and only then a competition.

Patience will help you to get the max from the game. Losses give experience. Struggles with new classes and new maps help you grow. Finding the best teammates may be a long process but the result is an ultimate reward.

We also cover other popular games. Rust is a recent addition to our platform. 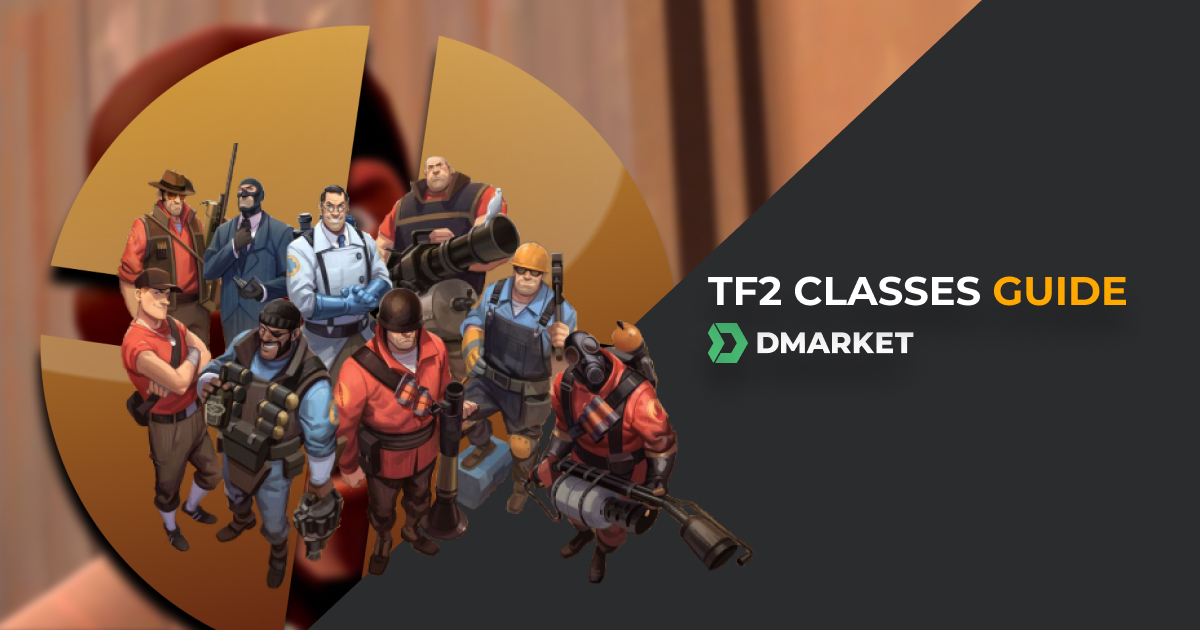